OUR KAMBHA – A CHENNAI SURVIVOR’S TALE 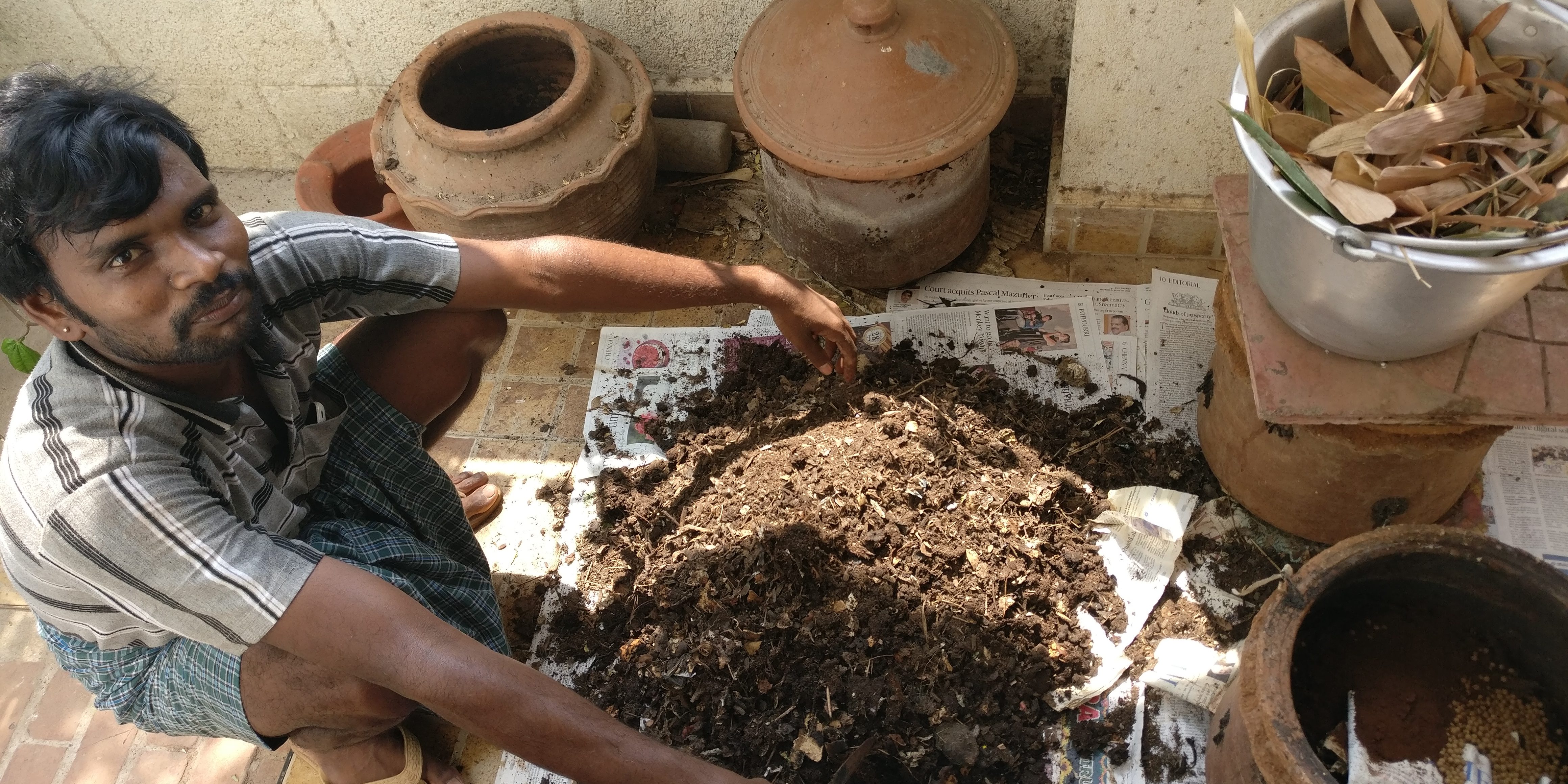 This is Munian. He holds an important position in our home besides being an odd-job man. He is our “Chief Compost Assistant” (CCA). He has held this post since 2013 when we first welcomed a kambha* into our home.

During the initial months, my husband and I learned to work the kambha. And quickly realized we were indulgent but lazy composters. Hence the urgent need for a competent CCA.

Enter Munian. Every few months, he helps stir, re-arrange, sieve, and sprinkle our compost into plants while we give extremely detailed instructions from the side- “Let the Mango seed be, Munian”, “Crush the egg shells a bit more, Munian”, “How did a milk packet get in here?”.

Munian and our kambha have survived 2 big disasters over the last couple of years. The Chennai Floods of 2015 and Cyclone Vardah of 2016.

Our colony in Nandambakkam, Chennai was one of the worst affected during the December floods of 2015. Many in our area had boat rescue stories to tell, mushy furniture to replace, and the forces above to thank for surviving 6-10 feet of water inside our homes.

My husband and his best friend were the first bravehearts to re-enter our home two days after the water receded- to begin Operation Never-Ending Clean up. Standing tall amidst toppled chairs, wrinkly documents and an upturned refrigerator was our kambha. Damp but with it’s spirit intact. It managed to stay put during the deluge, and rose to action right after- gobbling up all the rotting food in our house- giving us a chance to dump less than the average Chennai-ite. Munian lost a lot too, but was seen helping out folks in our colony while piecing his home together on the side.

12 moons later, Cyclone Vardah struck the city in 2016. Naughty winds uprooted whatever was in its path. Yet, our kambha once again refused to be blown away. What’s a speed of 130km/hr, it seemed to say with its nose up. Munian too thought the same, and was back walking the colony roads- clearing and salvaging our unfortunate trees.

Our kambha has been extremely kind to us over the years, converting food waste into earthy, life-giving black gold. And we strongly suspect, every kambha and compost pit out there has a similar personality.

We just need to get one home. The kambha will do the rest. And if like my husband and I, you need some help, enlist the help of a Munian.

Really, there is no excuse.

Plants get some compost love

*A Kambha is a stacked/tiered terracotta structure meant for composting organic waste into manure.

Charitra Parthasarathy specialises in boring friends and relatives full-time about earth-friendly topics like composting, segregating, re-using bags and the likes. During her downtime, she is studying to become a yoga teacher as she transitions out of her past-life as an award winning journalist with NDTV.