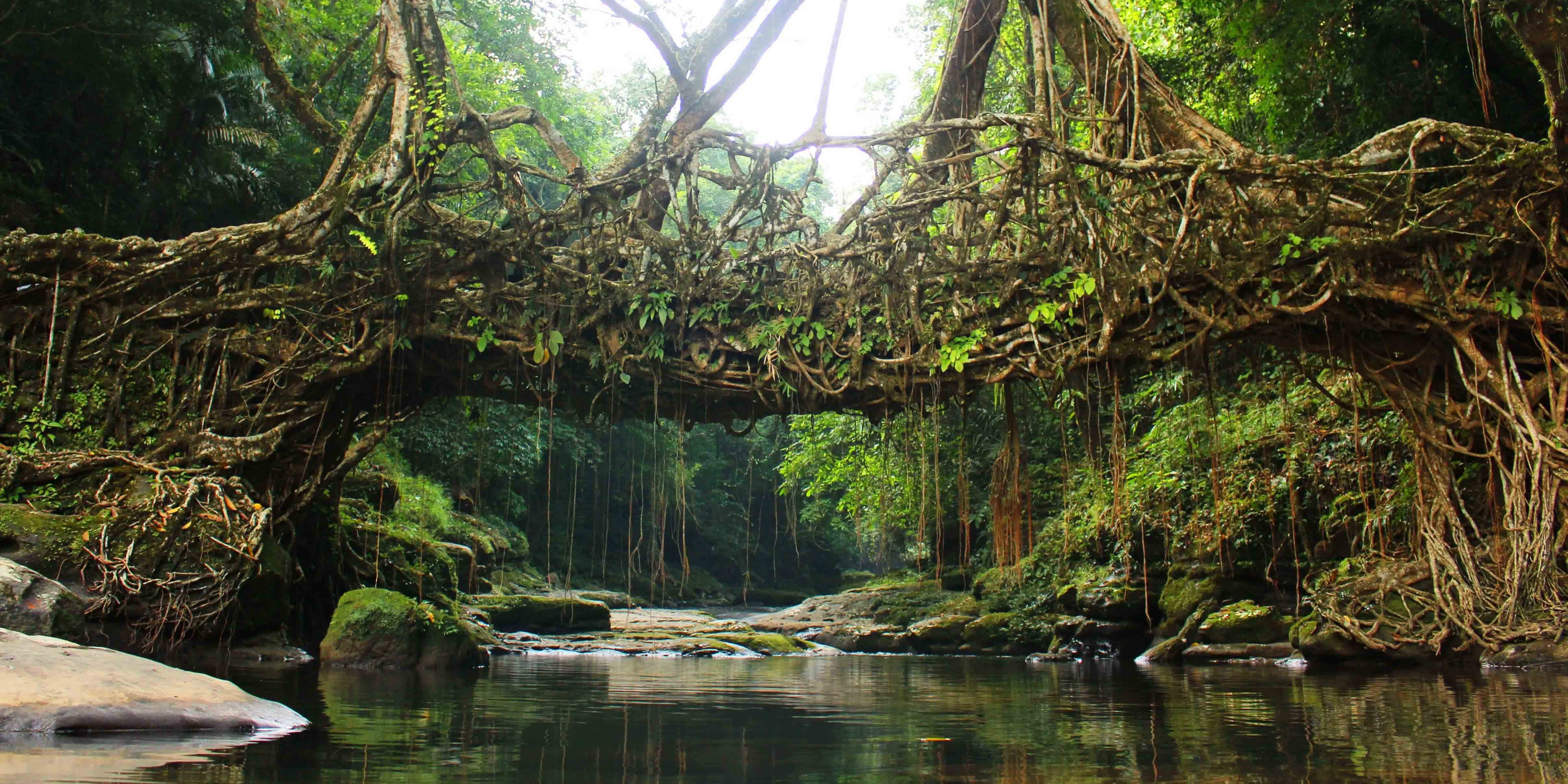 “Can we visit one of the living root bridges?” asked my aunt, before planning a visit to Guwahati.

Tribes in the Khasi hills of Meghalaya that border Assam have been using the adventitious roots of the native Ficus plants to create organic, natural, zero-waste constructions that are now popularly known as living root bridges. They are beginning to get popular (especially the ones that accessible by road), and these gnarled and stunningly sturdy structures have experienced a tremendous increase in tourist traffic.

I agreed quickly and after a bone-rattling, two-hour journey through hilly roads, we arrived at a tiny hamlet that was immediately distinct because there were no discarded plastic wrappers lying about – no flashy yellow or iridescent orange empty packets of chips lying inside gutters or hurriedly shoved into corners. In a couple of hours, a simple hamlet with less than 100 families showed me how we could begin to transform our living spaces.

About 130 years ago, the villages in this area suffered a deadly attack of cholera. Even 50 years ago, there was open defecation and pigs loitering around the village. What turned the tide was a concerted effort to give children a sense of pride in their surroundings. I saw young ones rush to pick up the trash strewn by careless tourists. Their parents simply kept a distant eye on them from their shopfronts.

People often say that if you educate a woman, you educate a family. In the same way, if you give a child good habits, that (opinionated, sharp-eyed, and undiplomatic) kid becomes a life-long insurance policy for cleanliness. (Have you ever tried swearing in the same pincode as a little kid just after you told her that it was a ‘bad word’? Then, yeah, you know why I say that you won’t get away with chucking things out of a car window just after lecturing a round-eyed child about using dustbins)

Growing up near Besant Nagar beach, in Chennai, I saw the regular appearance of dustbins along the promenade (I particularly remember ones that looked like rabbits), that slowly became decrepit, and then became trash, travelling along with the garbage in dump trucks (unless, of course, they were stolen. There seems to have been an amazing black market for large, used dustbins). In Meghalaya, near the living root bridges, I saw conical baskets made from the abundantly available bamboo plants. They were perched on little platforms and were regularly used by the local people to gather non-degradable waste (much of which catered to the needs of tourists. I would be surprised if the local cuisine involved packaged fruit juices).

The main attraction of the place was the centuries-old living root bridge that connected two sides of a small rivulet. I could imagine the water swelling during the monsoon and becoming unnavigable. The Khasi tribes have spent generations in slowly building these bridges, that don’t collapse, rot, break off, creak, or sway for a remarkable number of years. Each time the Ficus plant lets down an adventitious near the bridge, people crossing the river entwine it with the existing structure, strengthening it one miniscule root at a time.

When I think about the enormous impact the construction industry has on global carbon emissions, I am amazed by the wisdom of these people and their ability to find natural solutions to natural problems.

So, this new year, perhaps your resolutions can be to teach your children to generate less waste, to start segregating at home, and to talk to people from all walks of life to find natural solutions to your problems.

Have a wonderful, sustainable 2018!