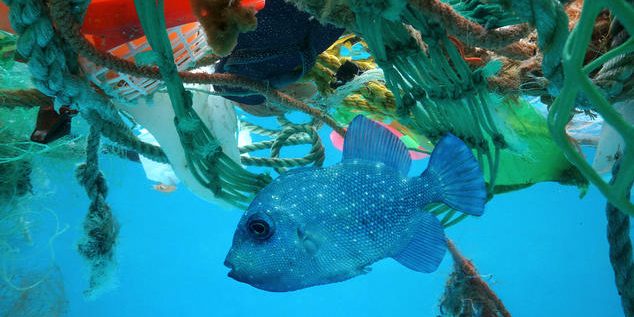 What is 1.6 million square kilometres in area (half the size of the India), seen in open ocean, far from most inhabited islands, and thousands of kilometres away any continental landmass?

This is a region in the northern Pacific Ocean, between North America and Japan, that is bound by a series of ocean currents that converge to create a central zone of stable water. Normally, this should have led a region with abundant fish, and rich biodiversity. When ocean currents come together, they bring biological material from different corners of the globe, create a region of warm water in which food chains and webs quickly give rise to stable ecosystems.

In less than one century, though, we have produced and discarded about 7 billion tons of plastic. A disproportionate amount of this waste lands up in the oceans. They come from litter left on beaches and river fronts, debris generated at ports, thrown overboard from ships, boats, and deep-sea refineries, from untreated sewage let into water bodies, from overflowing storm water drains, and from furious flood waters that yank large chunks of garbage towards rivers and seas. To say nothing of the ‘games’ on the beachfront, often involving an old slipper or plastic bottle thrown into the waves.

These materials degrade over time, worn down by the persistent forces of the ocean. They break down into small pieces that become a sludge-like film floating on the surface of the water. In fact, this is so ubiquitous that there is name for this kind of plastic – neustonic. The term ‘neustonic’ was earlier used to describe animals that lived on or just under the surface of water. Like flying fish, beetles, bacteria, and plankton. Now neustonic plastic is floating like a giant blob of toxic material in the middle of an isolated part of the world.

There are different estimates about the size of Great Pacific Garbage Patch. It is hard to visualize the area through satellite imagery because the plastics are so minute. Right now, different areas of the region are sampled physically and tested for plastic concentration. At the centre of this ‘patch’, the concentration of debris is highest – about 100 kilograms per square kilometre. It is also difficult to demarcate the limits of the region, because there are very very few water bodies completely free of contamination. Scientists, therefore, have to place a limit (1 kilogram per square kilometre, for example), and only analyse the regions that have a higher concentration of debris.

And the Great Pacific Garbage Patch is not the only Pangea-like floating mass in the oceans. Regions where ocean currents converge are becoming the world’s largest garbage dumps.

So what can we do?

1. Participate in Beach Clean-Ups – Many people will tell you that it is a pointless exercise because the garbage is just going to come back the next day. But people have done awe-inspiring things (did you read about the Olive Ridleys in Versova Beach in Mumbai?), and well, perhaps it is a drop (of plastic) in the ocean, but every bit of effort counts.

2. Learn about Ocean Currents – Astronauts in the International Space Station often speak and write about the humbling experience of seeing our beautiful planet from outer space. I think that if we learn about the everyday magic of our biosphere, and the interconnected forces that sustain us, it will become easier to be energetic about conservation and preservation.

3. Less is Much More – One disposable bottle, straw, plastic wrapper, or disposable container avoided every day by every person – it could add up very quickly. Eat when hungry, shop when you need things, and love and use what is already available. It is not hard. What is hard, however, is something that an incredible young man is trying to do. Boyan Slat is sending a device into the ocean to clean up the Great Pacific Garbage Patch – without hurting the creatures who also live in those waters. Send a positive thought towards this project and follow its progress over the next few months!